You are here
Home > Pima Cup

Games this year will be played at the new Kino South complex and Harris.

Note: U7 and U8 teams will be allowed to play with just a roster — but the roster must be registered players and verified by Club president, DOC or registrar.

Wednesday March 4th at Peter Piper Pizza (4112 E 22nd St)  from 5:30-8:30PM. All in town teams are required to check in at this time or make prior arrangements.
Out of town teams only may check in at Kino South Fields at Headquarters. Please arrive at least 1 hour before your first game to allow ample time to complete
Documents needed:

. Loan Player forms for all players being borrowed from another club (not needed if within the same club)

. AYSO teams your Player Applications must have original signatures by the medical release form section

. AYSO teams need to have RC signature on the player cards

. Coaches and Managers need to have player cards with Photos 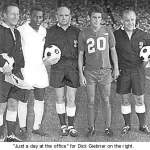 Mr. Giebner was born in Saxony, Germany December 1910. He was reared in the German countryside until the age of fifteen, when he moved to Chicago, Illinois. Due to his lack of formal training in the English language, he elected to play “catch up” in night school and completed all 8 grades of grammar school in a year and a half. He then proceeded through Carl Schurz high school in Chicago and received his college degree from Northwestern University after seven years of night school.

Mr. Geibner was a soccer player in the Chicago area, and was the senior goalie from 1929 through 1936. During the 1936 season, facial stitches as well as a broken foot prompted the change from player to referee.

The late 30s had Richard Giebner refereeing major national cup garnes and in 1939 he was the referee for the Inter-city rivalry between St. Louis and Chicago.

The Second World War then took Mr. Giebner out of the middle of the fleld until 1946. Upon returning to Chicago, his career resumed and by 1959 he was one of the chosen referees for the Pan American games in Chicago.

In 1963 he was elected to the F.I.F.A. as one of the seven referees representing the United States in that world soccer body. Mr. Giebner’s game experience ranged from World Cup elimination games in Costa Rica to the U.S. final game in Los Angeles. His career total of over 20 international matches gives him a degree of experience unmatched by many.

Dick Giebner moved to Tucson, Arizona in 1977 and has been an active referee as well as organizer of many related soccer groups that, through his dedication, have brought Tucson soccer where it is today, a viable, growing, healthy sport for all.