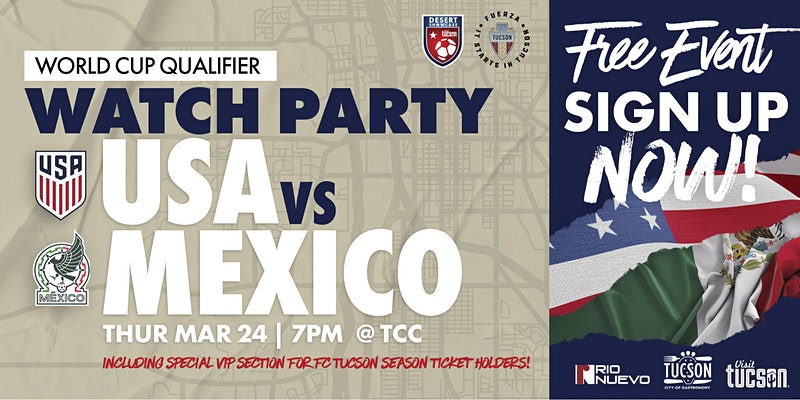 The celebration of “The World’s Game” will kick off on Thursday, March 24, as the United States plays Mexico at Estadio Azteca in Mexico City. Tucson’s Watch Party will be held at the Tucson Convention Center, where fans of both national teams will have the opportunity to enjoy food trucks, music and watch the game on a pair of 20-foot big screens.

“Soccer sobroso is an opportunity for our community to celebrate southern Arizona’s culture, food and music through our love of soccer,” said Amanda Powers, president of FC Tucson. “Whether you’re wearing the red, white and blue and cheering for the U.S., or the green, white and red and are a proud supporter of Mexico, we want all our fans to come out and enjoy the game with us.”

FANS: CLICK HERE TO REGISTER FOR FREE AND ENTER TO WIN!

The Desert Showcase presented by Visit Tucson is a platform for FC Tucson, Tucson’s professional soccer club, and Official Community Partner, Rio Nuevo, to showcase Tucson’s City of Gastronomy designation. Sonoran Hot Dogs, Horchata, Agua Fresca and more will be on the menu for purchase for fans to enjoy while taking in the match.

The party doesn’t stop there.

The penultimate game of the qualifying round, which will be played in Orlando, will be at 4 p.m. MT.

The crescendo of the Desert Showcase Watch Parties will be Wednesday, March 30, at the iconic Hotel Congress, Tucson’s cultural landmark. This final day will feature the United States’ game at Costa Rica (6:05 p.m.) as the qualifying round comes to a conclusion.

The Desert Showcase presented by Visit Tucson has brought some of the top professional soccer clubs throughout the United States to Southern Arizona in January and February as part of the 12th annual event.